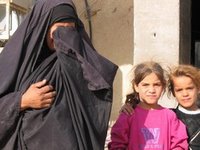 Women Represent 60% of Iraq
***
treated better
& civil rights more secure
under Saddam Hussein
***
per new survey of Iraqi women leaders
IRIN is part of the UN Office for the Coordination of Humanitarian Affairs. It recently published the results of a report by a non-governmental organization that concerns itself with women's freedom in Iraq. The report surveyed women in leadership roles in Iraq.

Women represent roughly 60 percent of the Iraqi population. Despite a 25-percent representative presence in parliament, however, they are seldom entrusted with high government positions, while their contribution to political debate is rarely taken seriously.

“When US troops entered Iraq, we thought it would be a great opportunity for Iraqi women to begin having their voices heard,” said Senar. “But we were wrong – the opposite has happened, and we’re losing ground by the day.” Women’s groups point to the new government, many members of which take a conservative view when it comes to the role of women. “When we tell the government we need more representation in parliament, they respond by telling us that, if well-qualified women appear one day, they won’t be turned down,” said Senar, a woman's freedom organization leader in Iraq. “Then they laugh at us.”

“...Women should stay at home with their families. Participating in politics will distance them from their kids,” said Sheikh Marouf Abdel-Kader, a religious leader at one of the mosques in Baghdad.

The new poll of leaders of Iraqi women's-rights groups finds that women were treated better and their civil rights were more secure under deposed President Saddam Hussein than under the faltering and increasingly sectarian U.S. - installed government. “The results show that women are less respected now than they were under the previous regime, while their freedom has been curtailed.”


{Columnist/TV host Bonnie Erbe said of IRIN's reporting of the survey: "Oh, and I'm sure the black-helicopter types, (the guys who go rabid at the mention of the United Nations), will have a field day discrediting IRIN's report. But given that "anti-U.N. types" were the same guys who got us into the Iraq invasion in the first place, who has more credibility now? I vote for IRIN as the lesser of two evils."}

[ -Scottnote: tho they represent 60% of the population no women are in the running for any of the nation's top nine (9) posts in the newly forming government. Gads, if our pre-emptive invasion was not for WMD (increasingly clearer all the time), and it's not democracy or freedom(increasingly clearer all the time), then geez what's left?...............uh...certainly not for large oil company interests seizing control of vast oil resources under Iraq... Bush could not possibly have used the amerikan military and hundreds of billions of taxpayer dollars in a pre-emptive invasion of another country for that? Just couldn't be. ]
posted by - Scott at 8:28 AM 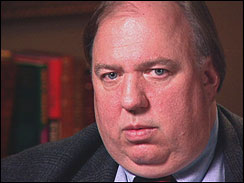 Watch 60 Minutes
this Sunday 7:00 pm ET/PT
airing April 23rd
Former highest ranking CIA officer in Europe: "The policy was set. The war in Iraq was coming and they were looking for intelligence to fit into the policy." [CBS]

"[The source] told us that there were no active weapons of mass destruction programs," says Drumheller. " The [White House] group that was dealing with preparation for the Iraq war came back and said they were no longer interested. And we said 'Well, what about the intel?' And they said 'Well, this isn't about intel anymore. This is about regime change.' "

Tyler Drumheller a CIA official who had a top role during the run-up to the Iraqi war charges the White House with ignoring intelligence that said there were no weapons of mass destruction or an active nuclear program in Iraq.

[-Scottnote: Frankly, I can't wait to see BushCo's approval ratings drop still lower. (Foxnews: President Bush’s job approval rating slipped this week and stands at a new all-time low of 33 percent, down from 39 percent in mid-March.) Imagine the coming week after a "60 Minutes" public pounding. Add that to fallout from breaking news that Secretary of State Condoleezza Rice "leaked" national defense information to a pro-Israel lobbyist in the same manner that landed a lower-level Pentagon official a 12-year prison sentence, according to the lobbyist's lawyer - Pay attention folks these guys are in the process of a slo-mo self-destruct; we may be watching some remarkable history unfolding.]
posted by - Scott at 9:24 PM

I finally admit it.
I am, in fact, completely confused.

Regarding the discovery this past week concerning Bush's having previously put out erred intel report info establishing the public perception that "mobile weapons labs" existed in Iraq:

According to white house spokesperson Scott McClellan: Bush publicly asserted that erred story because "the declassification process" had not yet been completed on later intel reports that had specifically & unequivocally completely disproved the existence of the same mobile weapons labs. Moreover, unfortunately, Bush could not simultaneously share with the public that the erred story he was telling publicly - had, in fact already been investigated to its end and conclusively disproven - by our own people .......................(?)

Just last week, during the Plame leak gyrations Scott McClellan asserted the defense that Bush in fact has authority to declassify at anytime, at will, anything that Bush elects to declssify and "leak." Don't these two explanations of why/how Bush released publicly the intelligence info he decided to make public - directly conflict with one another?

This is making no sense to me - none whatsoever. How does the logic "NOT"conflict? Has public dishonesty advanced past need for plausibility? What am I missing? Does anyone understand this contradiction? Please deconfuse me? (and C. or phknjrk - where are you when I/we really need you?)

UPDATE: 4/19/06 : White House Shake Up: Bush "kills his messenger"in Press Secretary Scott McClellan. Perhaps some of BushCo's base will be appeased; the recent white house messaging, containing flagrant disconnects in logic like that mentioned above, can be cleansed thru some sacrificial scapegoate - "Hey, why not jettison McClellan....along with all our dirty bathwater?"

Bush lowering the S.S. Bushie into the waves with
Still more emphasis on
"You're-doing-a-heck-of-a-job-Rummy!"
Strategy ! ? !

April 15 — For a president who has responded to critics of the war by saying he takes his cue from commanders in the field, not politicians in Washington ...the past week has put the White House in an uncomfortable position. Administration officials acknowledged that unlike past criticisms from lawmakers, comments by a group of retired generals — who say they have only military objectives in mind — could carry extra weight.

The Defense Department has issued a memorandum to a group of former military commanders and civilian analysts that offers a direct challenge to the criticisms made by retired generals about Defense Secretary Rumsfeld. (a.k.a. a public relations talking points sheet).

A senior Republican Congressional adviser who was granted anonymity for fear that speaking publicly would damage relations with the White House, said of the war: "There needs to be signals sent — major signals — that some things are going to be different. That could, or should, mean that changes must be made. If not, and things go exactly the way they are, our candidates will pay a dear price."