Always Look for The Opportunity in The Chaos 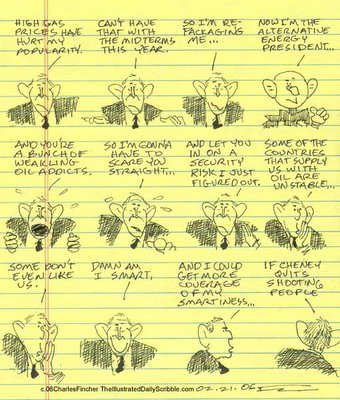 So I picked up a book in the new release section in the airport news stand earlier this week written by Peter Tertzakian, “A Thousand Barrels a Second ; The coming oil break point and the challenges facing an energy dependent world".

Tertzakian writes about something he calls the “break point”. In the evolutionary cycle of energy supply and demand he has named the milestone place where the status quo is shaken at its core. His analysis examines the energy cycle from a historical and global perspective - in great detail. I was fascinated by his observations of the whaling industry that tapped oil for illumination. (There’s lots of numerical data for the numbers fanatics too.)

He goes on to forecast the next “break point” happening before the end of this decade. It will force a re-structuring of energy supplies and consumption – especially with regard to oil.

He suggests the experience felt at the break point and after it, in something else he calls the “rallying cry” (of which his book is a part of) and then the “rebalancing” will be different globally from nation to nation according to situational circumstances.

He suggests the experience is felt in four broad chronological phases with overlap:

He concludes that moving ourselves through the process to our “rebalance” is not (NOT) something that should be left to the markets and business people and further there is no need to wait for the break point to take action. Markets and business people do not move fast enough nor are they without conflicted interests. He suggests oil is a political commodity now and that, historically, energy sources become “political commodities” at their break point.

In my estimation ~ his rallying cry represents 250 pages or so of support for a new front line Democratic Party platform component for 2008: to advance this country on a new path - that being a SUBSTANTIVE AND SERIOUS national program to reduce our fossil fuel dependency. I'm sugesting directing SIGNIFICANT resources at this objective on the scale of, for example, our program to build an Interstate Highway system. This would represent, in part, the Dems “answers” and “solutions” that the Repugs, given the opportunity and influence they have enjoyed, have largely ignored or gestured only some modest interest in. Our incumbent oil-led leaders are ineffective, non-responsive or offer us only an attempted anecdotal sound bite now and then.


***
And okay okay I’ll step off this particular soap box – for a small while anyway.
posted by wanda at 9:51 AM

Bush: "They know the difference."

During the first quarter of the past century British foreign policy approached oil with an eye toward oil’s military significance. It came to control three quarters of world oil reserves outside the USA. The British however blew it in Saudi Arabia the 1930’s backing the King rather than the Ibn Saud who would win that country’s war and after invite American oil companies in, who during the mid 1940’s were eventually joined by US initial meaningful government participation.

US foreign policy concerning oil security however historically largely depended upon the control of oil maintained through US oil company business dealing – not government involvement. A handful of US oil companies controlled nearly 50% of world oil production in the 1950’s but only 10% today. Their influence has diminished while US dependency on fossil fuels has increased substantively to now roughly 90%; the US government has necessarily become inextricably involved. (France is 57% fossil fuel dependent, for example.)

Non-OPEC exporters are at full production with no excess capacity. Only OPEC’s slim margin of excess production buffers the world from an oil crisis. World demand is increasing.

At the peak of US oil production and at the time of the energy crisis of 1973 President Nixon said,

In 1980 after Khomeini dethroned the Shah, President Carter said in his State of the Union address

“An attempt by an outside force to gain control of the Persian Gulf region will be regarded as an assault on the vital interests of the United States of America and such an assault will be repelled by any means necessary including military force.

In 1990, then Defense Secretary for the United States, Dick Cheney, said of Saddam Hussein who threatened Saudi Arabia after invading Kuwait,

“We’re there (in Kuwait) because the fact of the matter is that part of the world controls the world supply of oil, and whoever controls the supply of oil, especially if it were a man like Saddam Hussein with a large army and sophisticated weapons, would have a stranglehold on the American economy and on – indeed on the world economy.”

Not because of oil? Oh, right.

[Source for quotes above: Ted Koppel article, (former anchor for “Nightline” and current managing editor of the Discovery Channel), whose larger article suggests there is no reason to be coy about why the US is in Iraq, “It’s about the oil.”]

Liberal moonbats and a growing number of unpatriotic repugs believe the Bush Administration might just sort of call off this expensive misadventure at "freedom"; the US might either accept defeat and bravely admit mistakes were made, or fake some sort of glorious victory, whatever, but in any case - just leave.

However, the darker more probable reality is that BushCo has little reason to grant oversight of this strategic power, wealth and leverage to ordinary people in Iraq living above it all on the planet's surface. Very little reason.

That folks would be our job - to provide the political reason and to support the meaningful exploration and development of all energy alternatives reducing our fossil fuel dependency. It's not going to happen in the planning rooms at BushCo - being completely tied to oil.

Developing alternative energy sources might represent this country's best option diminishing terrorism. And it won't happen overnight or without commitment and cost.

Is it too bold to suggest this might represent an interesting major component for a political platform for Dems in 2008? Imagine if this country had spent the hundreds of billions of dollars we've spent on these initial "Oil Wars" differently - like on the development of infrastructure for alternative energy sources. Obviously, that dialogue, to be successful, would first require this country's public acknowledging the "why" we are in Iraq today. Maybe Bush was right and the American people would know "the difference" when they saw it?