Unanswered Questions
and why so few dare to ask

A few weeks after Election Night 2002, Roxanne Jekot, a computer programmer who lives in Cumming, Ga., began fearing demons lingering in the state's voting machines. The midterm election had been a historic one: Georgia became the first state to use electronic touch-screen voting machines in every one of its precincts. The 51-year-old Jekot, who has a grandmotherly bearing but describes herself as a "typical computer geek," was initially excited about the new system. "I thought it was the coolest thing we could have done," she says.
But the election also brought sweeping victories for Republicans, including, most stunningly, one for Sonny Perdue, who defeated Roy Barnes, the incumbent Democrat, to become Georgia's first Republican governor in 135 years, while Rep. Saxby Chambliss upset Vietnam veteran Sen. Max Cleland. The convergence of these two developments — the introduction of new voting machines and the surprising GOP wins — began to eat away at Jekot. Like many of her fellow angry Democrats on the Internet discussion forums she frequented, she had a hard time believing the Republicans had won legitimately. Instead, Jekot began searching for her explanation in the source code used in the new voting machines.
What she found alarmed her. The machines were state-of-the-art products from an Ohio company called Diebold. But the computer code — which a friend of Jekot's had found on the Internet — was anything but flawless, Jekot says. It was amateurish and pocked with security problems.
"I expected sophistication and some fairly difficult to understand advanced coding," Jekot said one evening this fall at a restaurant near her home. But she saw "a hodgepodge of commands thrown all over the source code" — an indication, she said, that the programmers were careless. Along with technical commands, Diebold's engineers had written English comments documenting the various functions their software performed — and these comments "made my hair stand on end," Jekot said. The programmers would say things like "this doesn't work because that doesn't work and neither one of them work together." They seemed to know that their software was flawed.
To Jekot, there appeared to be method in the incompetence. Professional programmers could not be so sloppy; it had to be deliberate. "They specifically opened doors that need not be opened," Jekot said, suggesting the possibility that Diebold wanted to leave its voting machines open to fraud. And, ominously, the electronic voting systems used in Georgia, like most of the new machines installed in the United States since the 2000 election, do not produce a "paper trail" — every vote cast in the state's midterm election was recorded, tabulated, checked and stored by computers whose internal workings are owned by Diebold, a private corporation. Jekot was particularly alarmed — and outraged — to learn that company CEO Walden O'Dell is one of the GOP's biggest fundraisers in his home state of Ohio and nationally.
~~~~~~~

Jekot says: "since October 2005:
1. We paid the taxes on our home (of 12 years) through an escrow account maintained by the lender. Despite that, the State foreclosed on and sold the home, and forced us to move to the above rental
2. The license plates on our vehicles have been cancelled/suspended
3. My drivers license has been suspended
4. Our voter registration has been moved to inactive status

Do these people have no shame?? Why should they? They're in power, so, they don't have to have any shame.

Thanks to Gypsy for this information.
posted by wanda at 1:39 AM

Preemptive Attacks on Iran's Nuclear Facilities
Effect and Cause 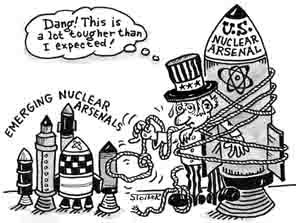 The Center for Nonproliferation Studies (CNS) was established in 1989 and strives to combat the spread of weapons of mass destruction (WMD). CNS has a full-time staff of more than 40 specialists and over 50 graduate student research assistants located in offices in Monterey, CA, Washington, DC, and Almaty, Kazakhstan and has built a larger worldwide community of nonproliferation experts, publishing both on-line and print resources and maintains comprehensive databases on WMD developments and nonproliferation regimes - on all aspects of WMD.

CNS has a research story, updated through: 20 January 2006, which is a chronology of key events related to the Implementation of IAEA Safeguards in Iran that was compiled at the Center for Nonproliferation Studies. 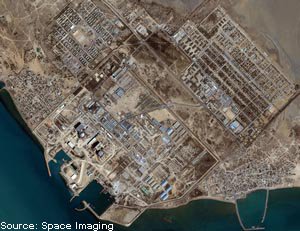 The concluding viewpoint of another CNS research story including details and footnotes on Iran WMD wraps like this:

"An attack on Iranian nuclear facilities in Bushehr, Arak, and Natanz, could have various adverse effects on U.S. interests in the Middle East and the world. Most important, in the absence of evidence of an Iranian illegal nuclear program, an attack on Iran's nuclear facilities by the U.S. or Israel would be likely to strengthen Iran's international stature and reduce the threat of international sanctions against Iran. Such an event is more likely to emboldenand expand Iran's nuclear aspirations and capabilities in the long term."

Regardless of IAEA findings, the U.S. is advancing the specter of nuclear weapon proliferation as a pretext for intervention. It represents a deja vu strategy strikingly similar to the strategy invoked in the previous Bush WMD campaign ramp-up to the War on Iraq.

In an unrelated article 18 Jan 18, 2006 in the Energy Bulletin, "The Proposed Iranian Oil Bourse", by Krassimir Petrov, Petrov writes on a little-recognized version of cause for the Iraq War - one with with an interesting twist - that may be still more import - as it relates to Iran:

"Two months after the United States invaded Iraq, the Oil for Food Program was terminated, the Iraqi "Euro" accounts were switched back to dollars, and oil was sold once again only for U.S. dollars. No longer could the world buy oil from Iraq with Euro. Global dollar supremacy was again restored. Bush descended victoriously from a fighter jet and declared the mission accomplished—he had successfully defended the U.S. dollar, and accordingly the American Empire."

Back ground: A similiar potentially significant topic related to currencies, in the making for several years, is that Iran intends to create an Iranian Oil Bourse. (The word "bourse" refers to a stock exchange for securities trading, and is derived from the French stock exchange in Paris, the Federation Internationale des Bourses de Valeurs.) This portends that competition would arise between the Iranian Oil Bourse and London’s International Petroleum Exchange (IPE), as well as the New York Mercantile Exchange (NYMEX). Please note that both the IPE and NYMEX are owned by U.S. corporations.]

"The Iranian government has finally developed the ultimate “nuclear” weapon that can swiftly destroy the financial system underpinning the American Empire. That weapon is the Iranian Oil Bourse slated to open in March 2006. It will be based on a euro-oil-trading mechanism that naturally implies payment for oil in Euro. In economic terms, this represents a much greater threat to the hegemony of the dollar than Saddam’s, because it will allow anyone willing either to buy or to sell oil for Euro to transact on the exchange, thus circumventing the U.S. dollar altogether. If so, then it is likely that almost everyone will eagerly adopt this euro oil system."

The Bush administration could undertake a desperate military strategy to thwart Iran’s nuclear ambitions while simultaneously attempting to prevent the Iranian oil Bourse from initiating a euro-based system for oil trades. The later might require attacks or forced "regime change" and the U.S. occupation of Iran. The US public, of course, has no specific interest in protecting a dollar from a bourse, or any oil company interests related to aspects of control - it would no doubt instead needed to be ramped-up through a balanced media-fed diet of other food groups like Iranian "axis of evil", terrorist and nuclear threat. Maybe even bin Laden could be reported as discovered hiding in one or six different Iranian nuclear facilities ? ( and remember - you read it at Podunt Post first!)

"Of all the enemies to public liberty war is, perhaps, the most to be dreaded because it comprises and develops the germ of every other. War is the parent of armies; from these proceed debts and taxes... known instruments for bringing the many under the domination of the few. . . No nation could preserve its freedom in the midst of continual warfare." - James Madison in Political Observations in the year 1795.

Pat responded yesterday in "The American Conservative" on the challenge of debating a Deja Vu War with Iran. His sparring partners might be more interesting - this time around.

He writes: "In the run-up to war in Iraq, "The Weekly Standard" was the voice of the “cakewalk” crowd clamoring for “Action This Day!” Cawing and cawing, in the end they got, and we got, the war they had craved."

“No voice in America was more resolute that the war would be an historic blunder than ours. From our first issue in 2002 until the 3rd Division stepped off, we warned this was an unnecessary war. Though Saddam was a monster, we said, he was no threat to us. But a U.S. invasion would radicalize Islam, increase terror, and leave our troops mired down in a nation whose people would come to hate us. We scoffed at the utopian blather about democracy breaking out as propagandistic nonsense.

Enraged, National Review read us out of the movement. In a cover story, “Unpatriotic Conservatives,” NR charged three editors and four of our writers with harboring a treasonous desire for a U.S. defeat. Said NR, all seven of us “hate” President Bush and “hate” America. A year later, William F. Buckley Jr. conceded that, had he known what he later learned, he, too, would have opposed the war.”

“Conservatives must raise the ever-relevant question: Cui bono? Who would benefit from a U.S. war with Iran? Who is prodding us into it? Are they looking out for America first?”

“Conservatives will demand that Congress, this time, debate, and, if we are going to war, declare war. That would force us to focus on what the real threat is and whether we cannot find some accommodation with these people, as we did with Stalin, Mao, Khrushchev, and Brezhnev. We never fought Russia and we need not fight Iran, unless they start the fight.”