ROUND-UP OF SNIPPETS FROM
LAST WEEK'S FINANCIAL NEWS
~ with context, the news and a perspective ~
(a guest post by -Scott)
Debt & Deficits
*
The "US National Debt"
is the total amount of money owed by the US government to everybody
*
The "Federal Budget Deficit"
is the yearly amount that spending exceeds revenues.
*
If one adds up the federal budget deficits and subtract the federal budget surpluses during the past 200+ years one will solve for the amount of the the current US National Debt.
*
The US National Debt as of 04 Feb 2006 as I drank my morning coffee was:
$8,205,145,984,276.79 = ($8.2 trillion dollars)
***
Each and every US citizen's share (my share) of our borrowed National Debt is roughly $27,493
***
This year we are programmed to borrow about $390 billion more: 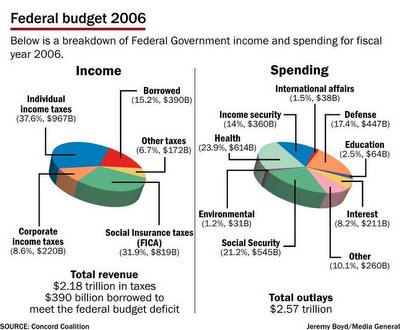 On to last week's news:
BUDGET CUTS:
The Republican-led House approved a $39 billion budget-cutting measure to slow the growth of benefit programs such as $11.9 billion in cuts to the student loan program, federal child support enforcement programming and for allowing states to reduce Medicaid coverage and charge increased fees for the beneficiaries for the Medicaid program understood to benefit the poor and disabled. A Congressional Budget Office study on the effects projected that much of the Medicaid savings would accrue because new co-payment requirements would drive tens of thousands of beneficiaries out of the program.
Robert Bixby, Executive Director of the Concord Coalition, a bi-partisan group advocating for a balanced federal budget, said lawmakers were "nibbling around the edges" of entitlement costs. "Spending has gone up dramatically in this administration and taxes have gone down dramatically," Bixby said. "My definition of fiscal responsibility is: Are you paying for the government that you want? And we're not."
TAX CUTS:
The Republican-led Senate passed $70 billion in tax cuts Thursday. The Republican led House version of the bill advances a top GOP priority, a two-year extension of the Bush administration's previous tax cut on investment income. Republicans expect the final version of the bill will extend tax cuts for capital gains (profits from sales of capital assets) and dividends (profits from owning stock) understood to benefit wealthier individuals and businesses.
MILITARY SPENDING:
The White House said it planned to ask Republican-led Congress for an additional $70 billion after Congress last approved $50 billion in December to pay for the wars in Iraq and Afghanistan. Roughly 80% will goes for Iraq which has so far cost an estimated $250 billion since the U.S. invasion of Iraq in March 2003.
*****
- Scott view: The "bottom line" numbers are this: A $128 billion federal budget SURPLUS program under the Clinton Administration in 2001, has been followed each year by Bush and a Republican controlled Congress, with a federal budget DEFICIT program of, for example, at least $337 but potentially more this year. That 5-year overall program swing represents a $465 billion program swing into the red (a bad thing). The "Pay as you Go Tax-and-Spend" program was allowed to expire. Bush and a Republican-led Congress have expanded government spending while adjusting spending and taxing according to their priorities. Meaning, "Pay as you go tax and spend" was replaced by an "Assess Differently then Borrow-and-Spend Significantly More than Tax" program.
***
On Monday Bush willpubliclyy renew a call for "spending restraint" in sending off his proposed fiscal 2007 budget to Congress. For anyone interested, the Concord Coalition has issued a briefing called Seven Signs of Fiscal Sense: What to Look for in the President's Budget. The Concord Coalition describes themselves as a nonpartisan grassroots organization dedicated to informing the public about the need for generationally responsible fiscal policy.
posted by wanda at 11:59 AM

The State of the Union
what is the status of freedom,morality, and hope in America

"We will lead freedom's advance..." President George W. Bush in his state of the Union address, January 31, 2006

Meanwhile outside the Senate chamber of the nation that will "lead freedom's advance", Peace Mom Arrested
" Peace activist Cindy Sheehan was arrested Tuesday in the House gallery after refusing to cover up a T-shirt bearing an anti-war slogan before President Bush's State of the Union address."

Make no mistake, I don't agree with everything Mrs. Sheehan has said and done. But I believe to the core of my being in her RIGHT to voice her opinion. Even if that means wearing a t-shirt that bears an anti-war slogan.
Tell me again what her son (and thousands of others like him) died for? What's that you say? He died defending freedom? Am I wrong in assuming that 'freedom' includes being able to wear whatever you want to a State of the Union address. I guess she should have stayed nicely tucked away in one of those 'free speech zones' that were set up for protestors. Somehow I thought this entire country was a free speech zone.
So much for leading the advance of freedom. Maybe we need to start taking a little closer look at the status of freedom here at home.

"Defining moral commitments..."---Yes lets do define what 'moral' means to George W. Bush and republicans, as they try yet again to make men like Jack Abramoff, Tom DeLay, Duke Cunningham, and Bob Ney, disappear into the woodwork.

"the U.S. can be a "hopeful society" Tell that to the families along the Gulf Coast as they struggle to rebuild their lives. To the Americans who lose their jobs as they look to rebuild their careers and our soldiers in Iraq as they try to rebuild a nation. Tell that to the Fourty-eight million Americans who have no health insurance and no access to decent, affordable health care. To the millions of Americans who go to bed at night wrapped up in layers of clothing because they can't afford heat. And the millions of elderly who have to choose between paying their utilities, buying their medications or eating.

By all means lets talk about moral commitments and being a hopeful society. Lets talk indeed.
Lets talk about change, and just how much we need a change of leadership in this country. That's MY State of the Union address!
posted by wanda at 10:43 PM

Defining Moments
will you remember this day

There are certain moments in history that as they happen they're barely noticed. It isn't until many years later that their impact on our lives and the lives of those who will follow us are fully understood. I believe tomorrow will be one of those days.
The nomination of Samuel Alito will go to the Senate floor for a debate and then for an up or down vote. A few ragtag democrats will attempt to mount a filibuster, but they will be quickly overruled by the majority and Alito will be confirmed. There won't be much fanfare. The general public will hardly take notice. Yet this will be one of those defining moments.

"His background, record and silence on a number of questions speak volumes about his likely performance on the court," ( Thomas Mann, a Brookings Institution scholar.)
"I expect him to settle comfortably on the right of the court and write careful and intelligent decisions that support his longstanding ideological views and values," Mann said.[source]

This man holds within his hands the ability and I believe the will, to change not only the face of the Supreme Court but the way our country is governed.

Sen. Barack Obama, D-Ill., predicts that an effort to try to block a final vote on Alito would fail on Monday. [source]
To more effectively oppose Supreme Court nominees in the future, Democrats need to convince the public "their values are at stake" rather than use stalling tactics said Sen. Obama, who opposes Samuel Alito's confirmation.
Sen. Obama thinks Democrats need to do a better job of persuading the American people directly. As in winning elections. I agree.

Until we can come together, work together, and win back the majority in the Congress, moves like a filibuster are not much better than expecting an umbrella to protect you in a hurricane.
Somehow this reminds me of Rumsfield's comment," you go to war with the army you have". That's what this filibuster is. The Democrats are fighting with the army they have. Small as it is they are still fighting. In the face of certain defeat, they will still stand and be heard.
Some will call it politics. Others will call it grandstanding. Call it whatever you wish. The fact is tomorrow a small group of men and women will stand up and remind us all, just what this country is all about.
I for one will be proud of them. I'll be watching on C-SPAN. Because this is one of those moments I feel should not go unnoticed. If ever we become so complacent that we lie down in defeat before the battle is fought, then we have lost all that we stand for.
To those men and women who will stand and speak tomorrow, I say thank you. Thank you for reminding us that we are a country where the minority can still be heard. Thank you for reminding me that every voice counts. Even mine. And that every one of us has the ability to make a difference. We may not win, but we will NOT go quietly into that dark night.
posted by wanda at 3:19 PM