Are YOU a Koolaid People

In 1978, more than 900 people committed suicide in Guyana
by drinking cyanide-laced Kool-Aid at the behest of a religious nut
named Jim Jones. Thus the term "Kool-Aid people."

They are true believers committed to a political ideology or other belief system.
And no matter what evidence is presented to them, they are incapable
of change
. They would rather go to their death (or in this case send others to their deaths) than to admit having made a mistake by placing their faith and trust in the wrong individual (s) or idea.

I have come to the conclusion that this is an apt description of
the people who continue to support George W Bush and his administration. They must keep lying to themselves and attack those of us who have tried to bring forward the truth about this administration. 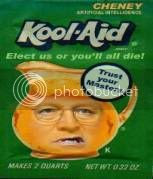 I saw on the news tonight where Bob Woodwards new book Plan of Attack is coming out next week. In this book Mr Woodward has some pretty uncomplimentary things to say about the Bush administration.
For one thing he backs up Richard Clarks claim that the President (In an interview two years later, Bush told Woodward that if the news had leaked, it would have caused "enormous international angst and domestic speculation." ) was adamant that a connection be found between Iraq, Osama Bin Laden, Al Qaeda, and September 11th. He also says that the disagreement about the need or wisdom of going to war against Iraq was so heated that even to this day Colin Powell and Dick Cheney hardly speak to each other (a claim denied by the White House**snicker snicker). It seems they made all their clever little plans but failed to include Colin in these plans. At some point Condi, said, 'hey you think maybe we should call Colin up and let him in on our plans'? I guess Powell like Clark just wasn't really 'in the loop' on a lot of things. Which might explain why we see so little of Powell anymore.
Supposedly Woodward spent a great deal of time with the President and his administration while gathering material for this book.
I wonder how the Repugnicans Republicans are going to spin this one?

Incidently tonight on The O'Reilly Factor, in the midst of a conversation with his guest O'Reilly inadvertedly let this little blunder slip in ...." so the Bush administration and the Pentagon are keeping this from us ...?" More secrets and lies. Even ultra conservative ( a stance he denies but his words speak louder than, well his denial) O'Reilly realizes (although he's probably loathe to admitt it) that BushCo are still lying to the American public.
posted by wanda at 12:05 AM


The World According to Garp George

I'd have to say, that picture almost says it all. Except he looked older, tireder, and less sure of himself.
I can only speak for myself, but here is what I saw.
A man out of his element, out of touch with reality and looking for someone to tell him what to say. Clearly no one anticipated him being ask if he thought he'd made any mistakes. Big mistake. I guess you could say that was his biggest mistake. Nah, maybe not.
I will touch on a few things that he seemed focused on. The uprising in Iraq. He says this is just a 'small group' of dissatisfied people. He might do well to remember that it was a 'small fraction of the people' who started the revolution in this country. Look what they accomplished. It's not the number of people fighting, it's their will and desire to prevail. People fighting for what they believe are their lives, are going to fight to the death.
Something that George Bush doesn't seem to have learned is, there is no shame in admitting you made a mistake. In fact it's only a fool who persist in standing by a decision they made that was the wrong one. People have criticized Kerry for being wishywashy, for flip flopping. Well at least he's man enough to admit he made the wrong choice when he backed the President in his decision to go to war. He, like the rest of us was mislead. Hindsight is 20/20. Even Bill O'Reilly admitted he'd been "hoodwinked". Yet the President persist in saying that he believes there ARE weapons of mass destruction to be found. Does he just not realize what a fool this makes him look like? There may also be gold underneath all that sand, but I seriously doubt it. Lets deal with reality not wishin and hopin.
Regarding Iraq. When is enough, enough? How much more money, and troops do we keep pouring into this little country before we admit, we are in deep shit there? How can he stand there and have the audacity to say he understands how the families of those who have died in Iraq feel? What an insult to these people. He cannot possibly understand. Does he have a child, a father, a spouse who is in Iraq? Even a niece or nephew? Even the child of a close friend? No. Has he ever lost a loved one in war? No. He hasn't a clue. Don't insult these people by being condescending or your fake platitudes. John McCain understands. John Kerry understands. George W. Bush can never understand. He's never been there and never will be.
As if it's not enought to say he understands, he then makes it worse by saying no matter what the cost we will stay the course . Cost to whom? It isn't costing him anything. Except hopefully an election.
Now, a question. Where are we going to find 10 to 80,000 more troops to send in? How many more of our tax dollars are going to be pouring into that country instead of being used here at home. For our children, our elderly, our highways, our economy, our health care ? When does the United States come first with this administration? Our foreign relations are already shot with 90% of the rest of the world. What's left to loose besides our ego and more lives? Buck up, take the hit, be a man, admit we made a mistake and get the hell out of Dodge while we still have some small amount of dignity left.
Of course there is one good thing , for every National Guard unit/battalion/brigade he allows to be called up, for every new troop he allows to be sent to Iraq thats one more family who's vote he won't get come November 2nd. So maybe there is a silver lining to this dismal cloud that his hanging over us.
posted by wanda at 4:41 PM

The next time someone suggests to me that we need to send even more troops into Iraq, I am going to direct them to this...

“We regret to inform you that Michelle Witmer was killed in action April 9th."

Her family is asking the military to stop her sisters from being sent back to Iraq after this week’s funeral.

“I can’t live another year like I’ve lived this one,” John Witmer told The Associated Press. “The sacrifice that this family’s made can never be understood by someone who hasn’t gone through it... It’s a burden I can’t bear. My family can’t bear it.”

Frankly, I don't think this country can bear much more of this.
I have a suggestion here. Lets send one of George Bush's daughters, and Dick Cheney's daughter Mary in as replacements for Rachel and Chairty.


Where I Stand, and How I Got Here