Barbara Bush's Hurricane Katrina Generousity
Given on Conditional Terms:
~ Her Donation Must be Spent on Her Son's Business
****
Some critics might say donations by the Bush family - to a tax-deductible charitable fund - shouldn't be required to benefit the Bush family. [source] Far more likely than some foul play intensional tax avoidance... those connected to the Bush family are so completely removed from any meaningful spirit of philanthropy... they might not be able to imagine how anyone might take issue with that clever investment strategy.
***
I began raising money for charitable organizations when I was 15 years old. Since, I have raised hundreds of thousands of dollars for more than a dozen different charitable causes in my lifetime. Never, in all that experience, has a donor ever so much as "hinted" at the availability of any kind of kick-back. Nor have I heard from any fundraising peers of anyone hinting at any sort of kick-back for a charitable contribution.
***
My facing east toward Washing DC and shouting as loud as I can "SHAME ON YOU!" at Mrs. Bush - although appropriate - seems like a pathetically inadequate response. After all, her family also initiated an unprecedented pre-emptive strike attack into a war that has killed and wounded people numbering in the hundreds of thousands depleting this country of hundreds of billions of taxpayer dollars, etc., etc., etc.
***
So, to spite her charitable contribution differently, I resolved on making my own "good cause" online contribution:
April 29th will be the Democratic Party's first-ever National Neighbor-to-Neighbor Organizing Day. The day is designed to test the organization and build new relationships among volunteers with door-knocking events in communities across America. In a 50-State Strategy, thousands of volunteers are slated to start the conversation to recruit hundreds of thousands committed to change this year.
***
Before I contributed $200 online an hour ago I took care to ensure that no part of my contribution be spent at a business owned by my family. Then I wrote to about twenty of my friends and requested that they match my contribution. I felt much better. And if she pisses me off again in responding to the publicity on her generous gift – I'll be sufficiently inspired to make myself whole once again by being out door-knocking and chatting with my neighbors.
***
3/27/06 UPDATE: Ignite, (Barabara's son Neil's business), has been under scrutiny since its inception in 1999. Background reports show that the company received it's initial funding from, for example, foreign oil sources, (and for any drinking the BushCo Kool Aid... this is just another disinterested foreign oil concern investing itself, like they do, in American children's software start-up companies. It's certaininly not oil influencing our President), as well as computer magnates and friends of the Republican family.
***
The scrutiny was over whether or not a local school district violated district policy by allowing the Bush's son's private bisiness to host a promotional event on campus.
***
Susan Ohanian, a former public school teacher and Vermont-based author who tracks educational issues, said she was stunned by Bush's donation. "The public has a very hard time understanding that some money is not worth it," she said. "I've never heard of anything like this so blatant: Pull at your heart strings with Katrina victims and then make sure your son profits from it."

Plucking Chords of Terror in My Heart
(a guest post by - Scott)
The nightmare inside my nightmare...
A new season of "The Next Generation" (in its political verison)
***
Pierce Bush 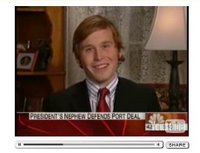 Some veiwers may find the substance of this trailer offensive; veiwer discretion is advised. Content includes a political horror ripening on the family tree.

Iraq veteran clears path to run for US Congress

Tammy Duckworth, the best known of at least a dozen Iraq and Afghanistan veterans who are running for Congress, has cleared the way for a November showdown by narrowly winning a hard-fought Democratic primary in her Illinois district.

Almost all the war veterans running for the first time in 2006 are Democrats. As candidates, they will help the party criticise the war without appearing unpatriotic.
[source]

The only question I have, is what the democrats are going to do to screw this one up?
posted by wanda at 10:21 PM

The Patriot Act Board Game
With Free Home Version linked below!
(a guest post with prize inside by - Scott) 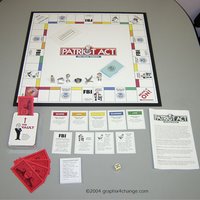 A gaming statement on the erosion of civil liberties in America since 9-11 under the watchful eye of the Bush Administration. The game actually utilizes sourced information about the Act and many of the “hypothetical situations” in the game are based on real life events.

The object of the game: The last player to maintain his or her civil liberties wins!

The playing board consists of spaces marked FBI, Homeland Security, Airport Security Screening, Pro War and Anti War spaces and a Free Speech Zone. What happens to the players on each space depends on their Security Profile and how many Civil Liberties they are in possession of. Sample game play: If a player lands on "Go to GTMO", or draws a card with the same command, or loses Civil Liberties due to die roll, the player will wind up in Guantanamo Bay Detention and will continue to lose Civil Liberties until the proper roll is achieved. Etc.

So get ready to laugh, cry and trample the Constitution!

Three (3) page explanation of the game (click me next!)

Print the game board itself on your own printer - and play immediately (click me last!)