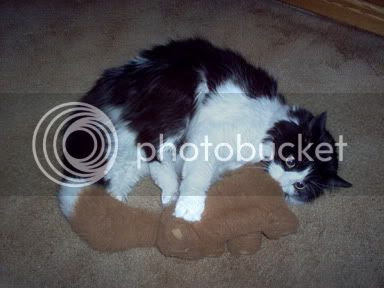 No, this is not my kitty. His name is Duffy and he belongs to my friend Ellen. I got tired of being the only kid in the crowd with no kitty to blog with for FCB. So from now on I'll be displaying pictures of my friends cats.
This is Duffy with his plush toy Foxy whom he likes to umm shall we say make wild cat love to.
posted by wanda at 6:34 AM

The more I read the more I am becoming concerned that we are heading for a holy war. The religious fundamentalist/ zealots in this country are rapidly reaching the all or none stage. One only need to read/follow the news to see clear evidence of their onslaught.
Take for instance the Pastor & deacons who outsted nine members of their church because they didn't vote for Bush. [source]
Then there's an employee of the Catholic Diocese of Palm Beach who's been attempting to bar a Palm Beach County jurist from receiving Holy Communion after his decision last week on a 13 year old girl's request to have an abortion.[ source ]
Add to those, that the Judge who made most of the rulings in the Terri Schiavo case was forced to leave his church after his pastor wrote him a letter suggesting "it might be easier for all of us" if he leave.[source]
Last but not least is the threat by Senate leaders to use the nuclear option to insure the 100% approval of Bush's judicial nominees. Yes, they're calling it the right to an up or down vote on the nominees, but with Republicans having a majority in both the Senate and the House, can there be little doubt a vote is a mere formality? [source]

I remember when Jimmy Carter was President. Politicans every where mocked him for his Christian views. At every turn he encountered resistance to his policies by those claiming he was trying to insert Christianity into the government.
I now see those same people embracing the religious right. As they systematically try to force THEIR religious beliefs on the public at large.
Even the long hallowed separation of church and state is falling by the wayside. With many politicians claiming it doesn't mean that that religion shouldn't be a part of governing. Excuse me, but if there is to be a separation of church and state, what else can that mean other than the idea that religion should NOT insinuate itself into governing.

Make no mistake, it is the Judeo-Christian fundamentalist/zealots who are at the root of this uprising. You won't see any Muslim, Wiccan, or Buddhist being included in their little exclusive club.

The judge in the Palm Beach case said " I am troubled that jurists might be pressured by those who think religion trumps state law."

He said he has heard from many colleagues who worry that religious groups are challenging judges' independence.

They have declared war.
From where I sit, the only question that remains is how long will it take the other side to respond in kind?
posted by wanda at 3:11 PM